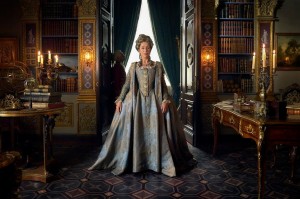 The star of the show, Dame Helen Mirren, was excited to be working in Vilnius again, fifteen years after the filming of Elizabeth I. Vilnius managed to portray various locations of the former Russian Empire.

Catherine the Great, the new Sky and HBO’s TV series depicting the latter years of the Empress of Russia debuted this October. The four-part 18th-century epic with the Academy Award winner Helen Mirren as its star depicts the latter stage of the 34-year-long reign of the famous Russian ruler.

Even though the events in the series are set in the Russian Empire, most of the series was shot in Vilnius, the capital of Lithuania.

As the city was part of the Russian Empire prior to WWI, the filmmakers managed to use the multi-layered architectural and historical nature of Vilnius to portray Saint Petersburg, a burning city in the Russian Empire, and a traditional Russian village, among other backdrops.

Apart from the cityscape of Vilnius providing the perfect backdrop for various scenes, several buildings in the city were used to portray the luxurious lifestyle of the 18th-century Empress. The Trakų Vokė manor doubled as Catherine’s quarters, while Vilnius University was made into the Council Chamber of Russian Empire, and the inside of the Writers’ Union took up the role of Empress’s private staircase.

The Lithuanian capital appears to be confident in not just providing the needed backgrounds, but in meeting other requirements the producers might have, too.

“One of the bigger challenges with Catherine the Great was building a real size private ship of the ruler,” commented Jūratė Pazikaitė, the director of Vilnius Film Office. “Built in the Lithuanian Film studio, the ship was as authentic as it needed to be.”

Another challenge met by the filmmakers was to film a burning city. After making a prop of wooden gates, the art department burned it and placed it in one of the streets in the city. The accessory looked so real that the residents started inquiring about how such a beautiful and old gate was allowed to burn.

“The burned gate caused a stir among the Vilnius locals,” added Pazikaitė. “The residents and journalists, after seeing the pictures of it, started posting news that we lost a cultural heritage object to fire, when it really was just a masterfully-made prop. I take that as a compliment to the mastery of the art department.”

It was the second time Helen Mirren, the star of the show, visited Vilnius. Fifteen years ago, the actress came to the city to work on the set of Elizabeth I. While praising the skill of the local filming crews and warm-heartedness of the population, Mirren was glad to make her return to the Lithuanian capital.

“I worked on Elizabeth I with Baltic Film Services 15 years ago, and it’s a pleasure to be back in Vilnius with them again,” said the actress. “Vilnius has retained its charm and history while developing in such an exciting way since I was last here.”

The connection between the actress and Vilnius led to some unexpected rendezvous in the city, too. While shooting the scenes in Vilnius University, located right next to the Presidential Palace of Lithuania, Mirren visited then-President Dalia Grybauskaitė.

After receiving a gift of locally-produced honey, Mirren and the President met a couple more times during her stay in Vilnius. Before leaving, the actress said that she would be glad to play the Lithuanian President if the opportunity arrives.

However, Catherine the Great was not the first big-budget production filmed in Vilnius in recent years. HBO’s Chernobyl (2019), the 10 Emmy-winning hit series, was mostly shot in Vilnius, so as Netflix’s Last Czars (2019), Tokyo Trial (2016), and BBC’s War & Peace (2016). Currently, Netflix’s Young Wallander is being shot in the city, too.

The growing appeal of Vilnius as a filming destination becomes evident when examining the statistics. In the period from 2014 to 2018, the amount of cinema industry capital spent in Lithuania increased from 1.25M EUR to 45.5M EUR. A local tax incentive allowing production companies to save up to 30% production costs played its part, so did the skilled local cinema professionals, supportive local government, and the city’s diverse architectural heritage. Although the film industry is active throughout Lithuania, Vilnius is the hub for all type of audiovisual productions in the country.