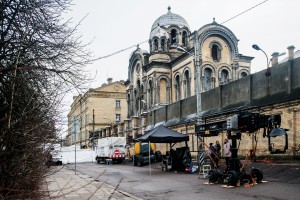 The biggest foreign production shooting in Vilnius before the pandemic was Netflix series Stranger Things. The crew was filming part of the show’s fourth season. Shooting took place at locations around the Lithuanian capital, including the recently closed century-old former Lukiskes prison.

While working in Vilnius, the show’s Director Shawn Levy remarked, ‘From the start, Stranger Things has been inspiring to all of us lucky enough to work on it. My adventure here in Lithuania in bringing the reveal of the ‘American’ to life has been a huge challenge but an even bigger inspiration, and we are so thankful to the city of Vilnius and the beautiful country of Lithuania for their hospitality.’

Other hit shows like HBO’s Chernobyl, and Netflix’s Young Wallander and Tokyo Trial were also shot in Vilnius in recent years.

Travelling back in time to the 18th century, HBO miniseries Catherine the Great transported Vilnius to Imperial Russia to recreate St. Petersburg, model Russian palaces, and tell the intense story of Catherine the Great, played by Oscar winning actor Helen Mirren, and her relationship with Russian statesman Grigory Potemkin.