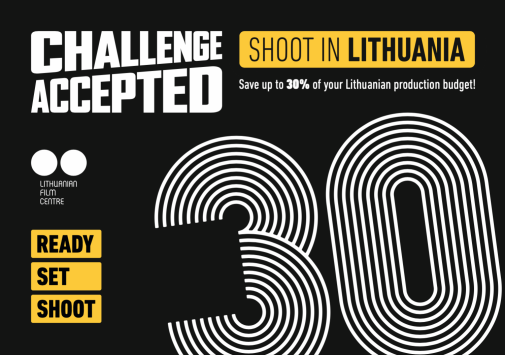 Even though 2020 will enter the pages of the history books as one of the most difficult years for the film industry, it was record breakingly successful year for the Film Tax Incentive for fostering film production which has been in place for eight years, the Lithuanian Film Centre says. Investments by production companies also rose significantly, as well as the number of the film projects that took advantage of the incentive.

According to the Lithuanian Film Centre data in 2020 the film producers, who have taken advantage of the Film Tax Incentive, have received 11.3 m Eur for film production. International film producers have spent almost 27 m Euros in Lithuania and this result has overcome the expenses of the same category in 2019, which were as much as 15 m Euros. In just a year the number of funded films almost doubled. In 2020, 58 new films received funding, of those – 37 were domestic, 9 co-productions and 12 foreign productions.

Each year Lithuania is consolidating its reputation as a country with a great appeal for the international film production, where it is possible to effortlessly take advantage of the tax incentive and to find professional partners when bringing film projects to fruition. In 2020 Lithuania was particularly liked by the Scandinavians, from 12 funded foreign production projects – as many as 8 were Scandinavian.

Most of the investments in 2020 were received by the Swedish crime series: With One Eye Open (dir. Lisa Farzaneh, Jesper Westerling Nielsen, production in Lithuania was taken care of by UAB Paprika Filmai) – 1.4 m, and The Truth Will Out (dir. Kristian Petri,Camilla Strøm Henriksen, production services provided by – UAB Ahil) – 1.1 m Eur.

Lithuanian Film Centre has noticed the popularity of the tax incentive amongst the domestic film producers as well. Through the whole time the incentive has been in place, domestic films have received 5.9 m Eur in investment, almost half of the whole sum – 2.5 m. Eur, was received in 2020.

Despite attracting increasing numbers of new investors, consistency amongst the companies interested in investment was observed – for the last two years more investors were those who had already taken advantage of the tax incentive previously.

A great upsurge in investments can be tied to the increased percentage of the tax incentive in 2019 from 20% to 30%. Also, due to the COVID-19 pandemic last year, businesses had to face the challenge of finding new ways of preserving as much profit as possible. Last year the incentive was used for the first time by 49 companies.

In years 2014 to 2020, a total of 200 Lithuanian companies have already invested into film production, and in total 35.6 m Euros worth of investment was made. One quarter of all investors were attracted to the incentive program specifically in 2020. In eight years, the incentive was used for funding the production of 215 films – investments were obtained as follows – 104 for domestic film projects, 58 for foreign productions and 53 for co-productions.

The purpose of the tax incentive that was introduced in 2014 is to create favourable conditions for film production in Lithuania. It can be taken advantage of by any business company in operation in Lithuania by donating funds for the film producers and thus reducing taxed income and profit tax paid. This incentive not only creates more favourable conditions for film production in Lithuania but is also beneficial to other sectors. Increasing number of film productions provides thousands with temporary employment opportunities, additionally with the international filming crews arriving in Lithuania, hotel occupation increases, café and restaurant businesses gain more customers, the same applies to transportation and leasing services as well.